Technology has always been an essential part of spacecraft. Computers, satellites, rovers... Just imagine where we would be without it!

While rovers are the most common type of space technology, there are so many more robots that deserve time in the spotlight. They provide useful data, perform various assignments, and they are extremely valuable to astronauts in space and scientists on Earth! 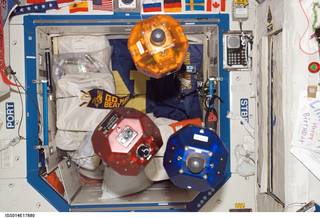 Attached on the outside of the International Space Station is a very important robot- Dextre. It performs repairs and completes tasks that would otherwise require a space walk by a human astronaut. Small, robotic balls called SPHERES float around the Space Station for scientific observation of movement in space. Another idea that is still being refined is the Robonaut, a human-like robot that can assist astronauts during missions, and possibly even stand in for astronauts on dangerous expeditions!

If your doll is going to build her own robotic assistant, first she will need somewhere to tinker and tweak her projects. A Maker Station is the perfect "workshop" to store different creations!

We would like to welcome our special guest crafter presenting today's DIY- Rudy, from American Girl Ideas!

Full instructions for this craft can be found on Rudy's blog! Watch the tutorial video here, or visit the American Girl Ideas Youtube Channel.

The Maker Station printables are so realistic! They go right along with the galactic theme.

Take a look at this side-by-side comparison of our DIY Maker Station (left) and Luciana Vega's Maker Station (right). I am amazed at how similar they are! Rudy's 3D plans and tutorial made this craft fun, easy, and adorable!

Team Odyssey bursts into the robotics lab, ready to start the day off with a robotics build session.

"Look, Ella!" Meg squeals. "A real Maker Station, just like you told me!"

"Well, now that we're here, let's get started right away. I think we should-"

All the campers look with expectant eyes toward Ella.

Ella folds her arms and tosses her hair. "Fine, I guess she is. But you've got to hurry. I want our team to get a head start."

Luciana steps up and shares her idea. "I thought it might be cool to make our rover walk and roll. We could attach wheels and then-"

"That won't work. In fact, none of your ideas will work. C'mon Meg, let's go." Ella grabs Meg by the arm and marches toward another Maker Station.

"Ellaaaaaa!" Meg wails as she is pulled away. "We're supposed to work as a team!"

Luciana slumps against the Maker Station. "I just don't understand. What have I done to make Ella this angry at me?"

"Maybe Ella feels intimidated by you, Luci." Johanna gestured over to where Ella barked orders at a discouraged Meg. "Why else would she alwayss try to do things her way? You are smart when it comes to robotics. Ella wants to be like that as well. Maybe she has troubles of her own, and this is a way to prove herself, yes?"

Luciana's thoughts raced back to the gift shop, when Ella spoke with her about not having friends.

"I never thought of it that way. Thanks, Johanna."

"Do not worry! Now, as we say in Germany, let's make socks!"

"Excuse me?" Luciana said with a giggle.

Johanna grins, a screwdriver in hand. "Let's get going! These robots are not going to build themselves!"

Camp posts will be shared on Monday, Wednesday, and Friday of each week.

If you complete a craft or want to share a photo of your doll at camp, snap a picture and send it in or share on Instagram using the hashtag #DollSTEMCamp2018 to be featured in the Camp Recap each Sunday!Email: americangirldollcrafter@gmail.com

DIY Doll Beehive and Flower Garden - Summer On The Farm 2019